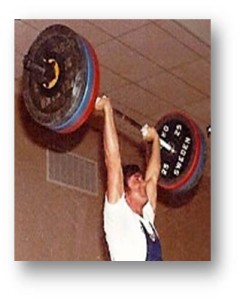 I remember these days like it was yesterday. I didn’t know very much back then but I did know one thing! I wanted to be like Stephen Miller. As a 15 year old kid, I watched the older guys of the Oklahoma Weightlifting Club train day in and day out. As soon as school was out for the day I would head over to the OU field house where we all trained. I was small and had very little exposure to this kind of training and environment. Actually I remember back then I could bench press more than I could squat. I asked if I could lift there and told Steve that our teachers aid in biology class was a lifter on the OU Weightlifting team and he said I should come by. Steve didn’t really say very much, but he didn’t ask me to leave either. That was all I needed to not hear. Since he didn’t tell me I had to leave, I started showing up 3 days per week to train. I remember after a couple of weeks one of the older guys saw that I didn’t have that great of a training routine so he scribbled one down for me in my notebook. After a while 3 days turned into 4 days per week and not long after I was showing up 5 days per week. Even when I had little to do for the day or nothing at all, I showed up anyway just because I wanted to be around all of the guys to watch and learn. I wanted to be the best I could be. It wasn’t long until they saw that I wasn’t going to quit so they started investing time in me. Each one of the lifters would teach me little things that would improve my technique or make my training more effective. To this day I haven’t learned this type of information in a class room setting. You must pay your dues! The time came for me to compete in a power lifting meet. I wasn’t asked either, I was told I was going to compete. They ensured me they would be there for me and it would be good for me. I agreed but mostly because I didn’t want to disappoint any of them and even more importantly, I wanted them to be proud of me. The meet was the 1980 Oklahoma State Collegiate Power Lifting Championships. I lifted in the 67.5 KG class and had to lose 7 pounds to make weight. I did alright for my first meet. I was pleased and I did the best I could. Actually I placed 3rd. But only being a sophomore in high school I was ineligible. I was a guest lifter and I knew that. So I watched the college student that I out lifted get the 3rd place trophy. I have to admit I was disappointed but rules are rules. I was congratulated by most everyone there mostly because I was the youngest to compete. Two weeks after the meet we had a weightlifting club meeting. It was just like any typical meeting that clubs have. Voting, discussing current issues and upcoming events. Standard stuff. As the meeting was about to close the president of the weightlifting club said, “As you all know we had the state collegiate meet here  two weeks ago and Terry won 3rd place. Terry did not receive an award so we decided to present him with this 3rd place trophy just like the one that was given”. I was so surprised. I was so proud. That was a defining moment in my life. I continue to train and I still have the trophy 35 yrs later. Thanks Steve, Wayne, and all the guys who raised me in the weight room. My life has never been the same.